Effective use of abrasives in blast cleaning

Effective use of abrasives in blast cleaning

As has been explained in the section Setting the Blast Pattern that to achieve the best cleaning efficiency the abrasive quality plays a very important role. However it is one of the most neglected areas and is a major area of concern. The following are the findings of the speakers during visit to the users of blast cleaning process:

The above factors play a very vital role in blast cleaning process. The effect of abrasive size can be understood very clearly from the following chart:

From the above it will be understood that to throw 500 gram of S-780 is vastly different from throwing 500 gram of S-70 shot. The impact of larger shot will be concentrated over a much smaller area than that of the finer abrasive. Neither would prove to be an efficient blast media. The larger abrasive would probably remove all the contaminants but over too small an area to be economical. The finer shot, assuming it to be thrown over a proportionately larger area, may not have the necessary impact value per particle to remove the surface condition. Hence the reason for a combination mixture, where the large particles are to carry out the major work of loosening the contaminants whilst the smaller particles carry out the lighter removal and provide coverage.

IT’S THE BALANCED OPERATING MIX THAT DOES THE WORK

A balanced work mix size distribution produces a better, more uniform surface profile, best suited for subsequent operations such as machining, bonding or painting etc. Effective and economical abrasive mixes contain a size range from small, medium to large particles. The choice of an abrasive for a particulate application is that of finish. The finishing operation may be the removal of heavy scale from a steel billet or the very light removal of sand from manhole cover castings. There are the surface preparations for critical applications of coatings of many types. All these demand individual choice of abrasives.
It will be appreciated that the cleaning rate varies with the choice of abrasive and the type of material being treated. The particular abrasive selected will also affect maintenance costs. From this it will be seen that the criteria of choice is that of desired surface finish.
Thus it is evident that a properly balanced size distribution in the abrasive work mix is the key to effective and efficient blast cleaning. Thus it is necessary to carry out the screen analysis of the operating mix.To maintain the proper operating mix the separator has to work efficiently hence the need for screen analysis of the operating mix & abrasive contained in the separator discard is equally obvious.
The objectives of the screen analysis are:

This practice of monitoring and controlling of abrasive mix is not being carried out and the outcome is: 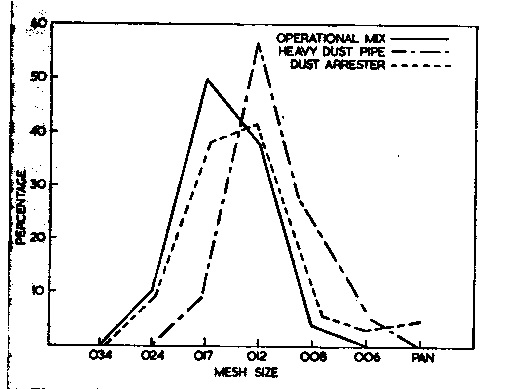 Erratic methods of adding abrasive can have the reverse effect of the previous case. The condition is one formed when the addition of new abrasive has been delayed and before topping up. Again the effectiveness of the blast will be diminished and the surface finish considerably lightened in texture. The heavy dust pipeline indicates an incorrect setting of the separator and that very little dust is taken into the dust arrestor. 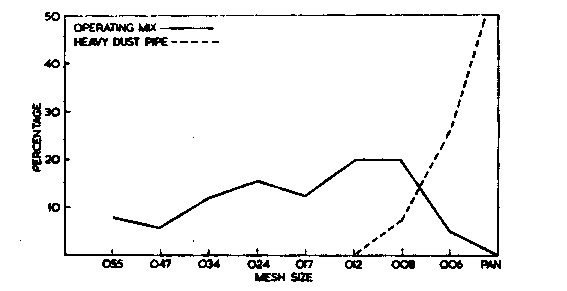 Figure shows the delay in making additions of new abrasive. This improper mix
will produce erratic results particularly upon the addition of new abrasive

A very poor operating mix will give a rough finish at low output. The consumption of abrasives will be high with heavy wear and tear on the ducting and dust tubes. 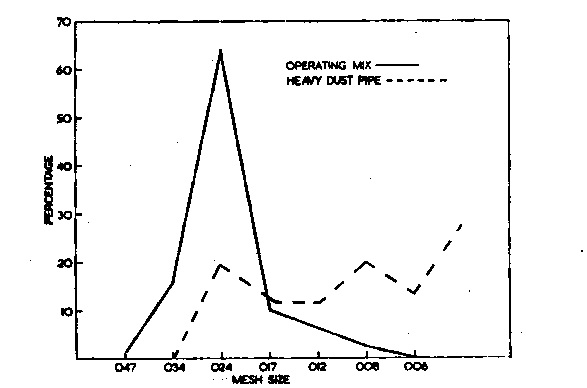 Figure shows poor abrasive control. Delay in making new additions results in an operating mix,
which is coarse and will affect both machine output and surface finish of the work pieces. 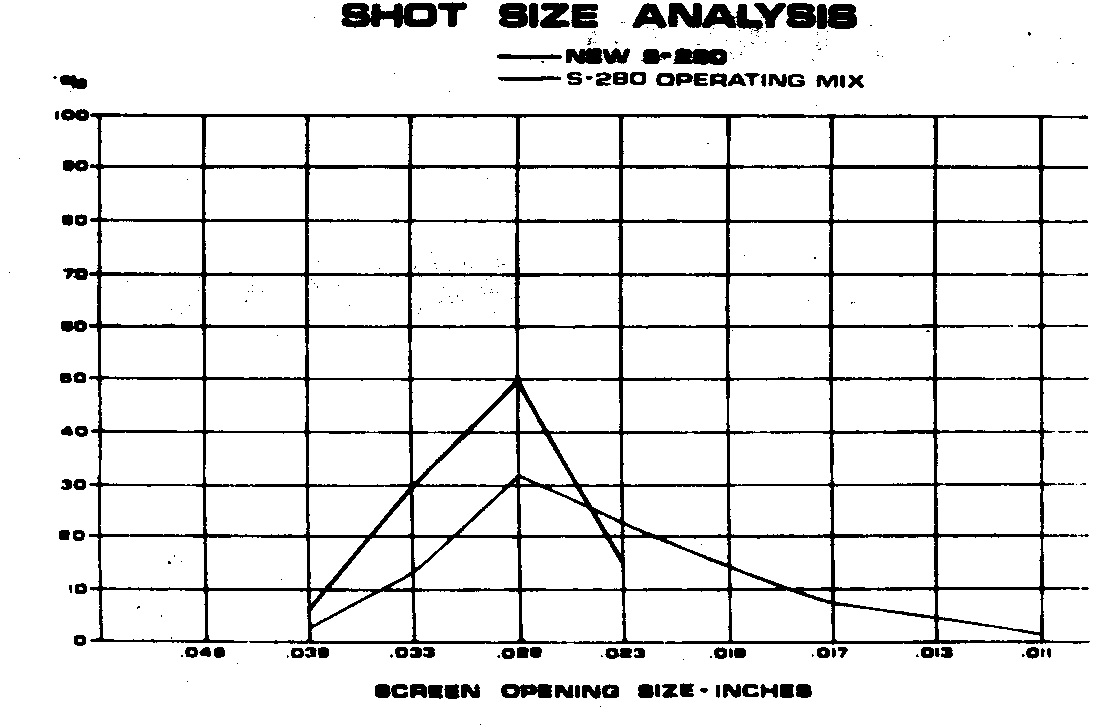 When obtaining operating mix sample from separator discharge point of the blast equipment the aim should be to collect representative sample rather than how much it weighs. For sampling purpose more than 200 gram (50 ml) is to be collected.
After the gross sample has been collected the next step is to reduce it to a suitable size for sieve analysis, without impairing in any way the particle size distribution characteristics of the original sample. This phase of the operation to be performed with care as done during collection of abrasive sample.
Coning & quartering: pile the gross sample of work mix in a conical flask as shown below. Pour the sample onto the apex of the cone and allow it to run down equally in all directions. Spread the sample in a circle, work round the circle gradually widening the circle to a uniform thickness. Mark the flat pile into quarter and reject two opposite quarters. Mix the remaining quarters into a conical pile, taking alternate portions from the two quarters. Continue the process of piling, flattening and rejecting two quarters until the sample is reduced to the 50 ml or 25 ml quantity that is to be tested. 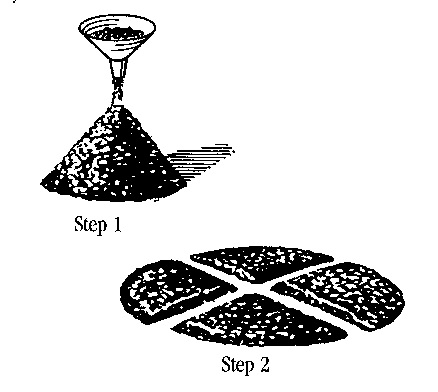 For sieving the Mechanical sieve shaker method can be adopted. Time of sieve shaking is of paramount importance. Ten minutes of mechanical shaking is usually sufficient for up to 200 grams (50 ml). Trial and error will determine the best time but time of shaking should not be less than five minutes.

Measure the material finally retained on each sieve by volume (in the graduate) or by actual weight .The sum of the material retained on all the different screens and the pan is to be used as 100% for calculation of the sieve analysis percentage.

Interpretation of the results must relate directly to the following objectives: 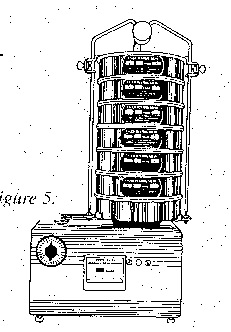 Selection of the screen for sieve analysis will depend on the type of sieving:

Contaminants in the operating mix:

Contaminants such as sand, ceramics, oxides, scale etc are to separated in the separator. Fines of this nature if present in the operating mix impose tremendous wear on the blast wheel components, causing high maintenance/replacement costs, causing costly break down time. One has to bear in mind that if 2% of these fines by weight are retained in the operating mix then it can cut the normal life of wheel components by half or more.

Thus when screening operating mix samples the objective is to check the size distribution of abrasives and whether any contaminants are present in the operating mix.
Thus after screening the residue or fine collected in the pan which if contains contaminants detrimental to the system and unusable abrasive then the contaminants to be separated from unusable abrasive using magnetic separation and in case it becomes difficult to separate then it is best to use screen size of 0.007" and screen the same and calculate the percentage by weight.
Thus it is advised that all users of blast cleaning equipment should carry out all screen analysis of abrasives from time to time and should form a part of Process Control. It should be done twice a week and proper control should be there in abrasive replenishment.
One more important factor is to control the abrasive size of new abrasive.  The following has been observed:

In order to contain all this proper process control has to be developed in all organization using blast cleaning system.